Why Do I Love These Dragon Ball Z Goku Toys? Take A Look!

Goku has been a great character for so many years. We’ve seen him grow from a child in Dragon Ball into a truly formidable warrior in DBZ and now he keeps growing within Dragon Ball Super. There are some superbly awesome DBZ toys Goku fans will go crazy for. And that’s what we’re showing off today. The best Dragon Ball Z Goku Toys.

Dragon Ball Z action figure Goku – The most popular one 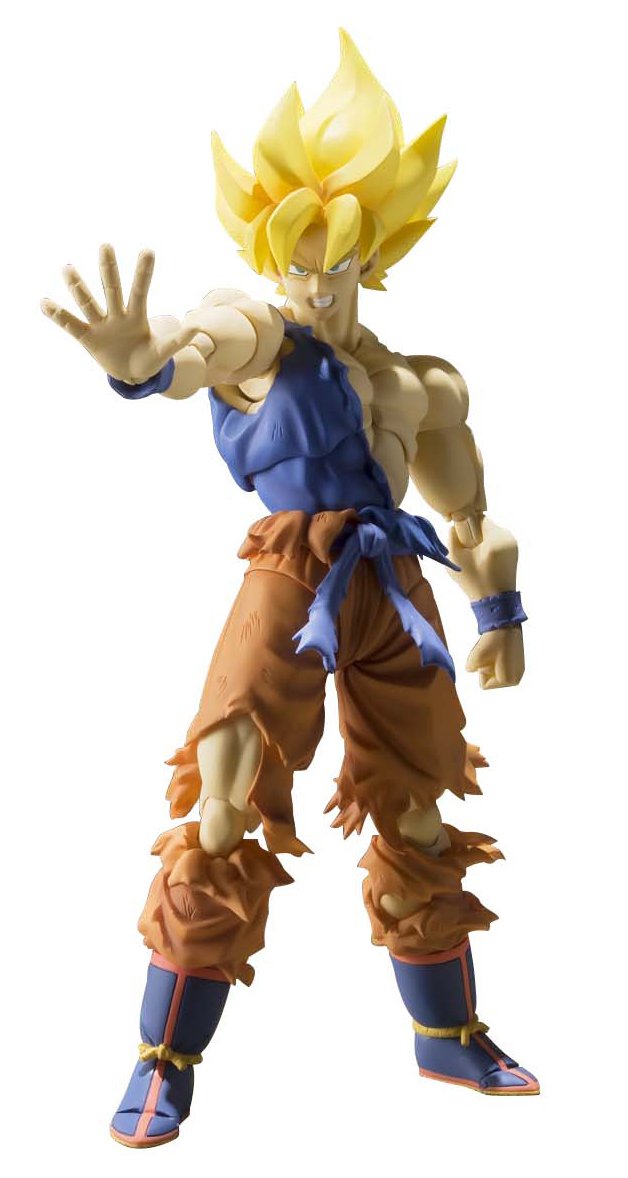 The Bandai Tamashii Nations Goku figure is my favorite. In fact, I think it’s my favorite figure from all of Dragon Ball Z toys. I mean, it’s Goku! This figure in particular though because of what I remember back when I was younger.

Thinking about the Dragon Ball Z TV show all the time. First seeing when Goku transformed into Super Saiyan against Freeza. I guess Krillin’s death just pushed Goku over the edge with anger. Although I don’t think he should be too surprised that Krillin died. Haha.

I also just plain think the look of this outfit is neato.  And the hair. You can’t beat Goku’s crazy hair.

But, to get down to business, let’s talk about the quality of the figure. It’s very well made just like other Tamashii Nations figures with so much articulation. You can move Goku around to do whatever you need him to because if you need him in a certain pose. It’s super easy to do with this figure.

The face is right on as well. That’s usually how you can tell a figure isn’t made very well. If the face looks jacked up. But, this is spot on. Great figure.

Although I love the figure above the most. There are still plenty more options if that Goku doesn’t float your boat. More Tamashii Nations Goku figures? Never a bad idea.  I think Goku’s new look for Super Saiyan Blue is great. I mean it’s pretty much just a blue version of Super Saiyan. But, hey it’s still awesome. I think it’s my favorite out of these three. It actually also comes with the classic Goku head with black hair so, ya know it’s like 2 Goku figures in one.

But, what I can say is that no matter which you choose you can be sure they are all high-quality figures that are very well made. Highly recommend these action figures. 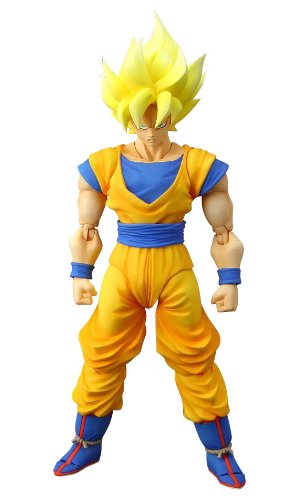 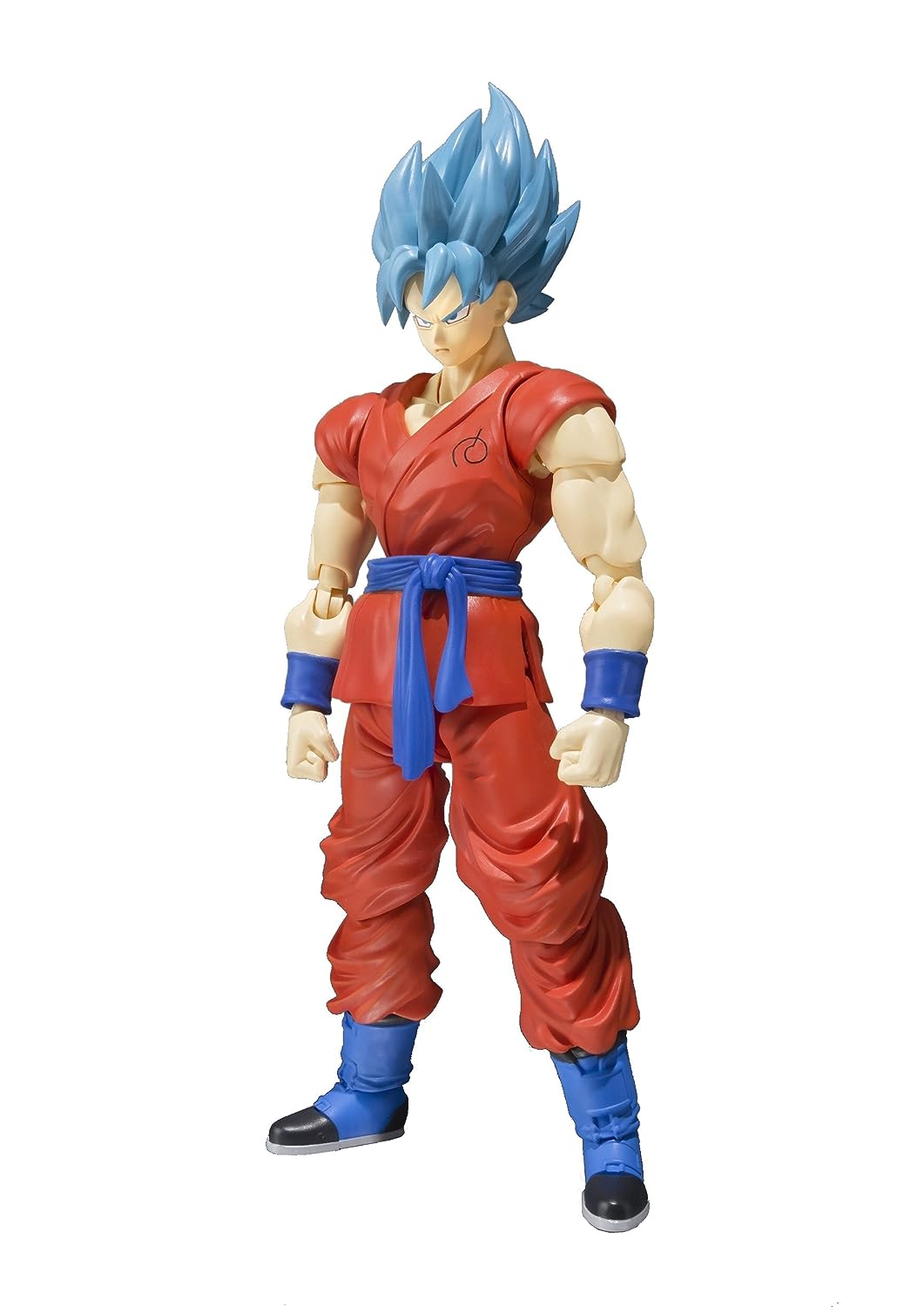 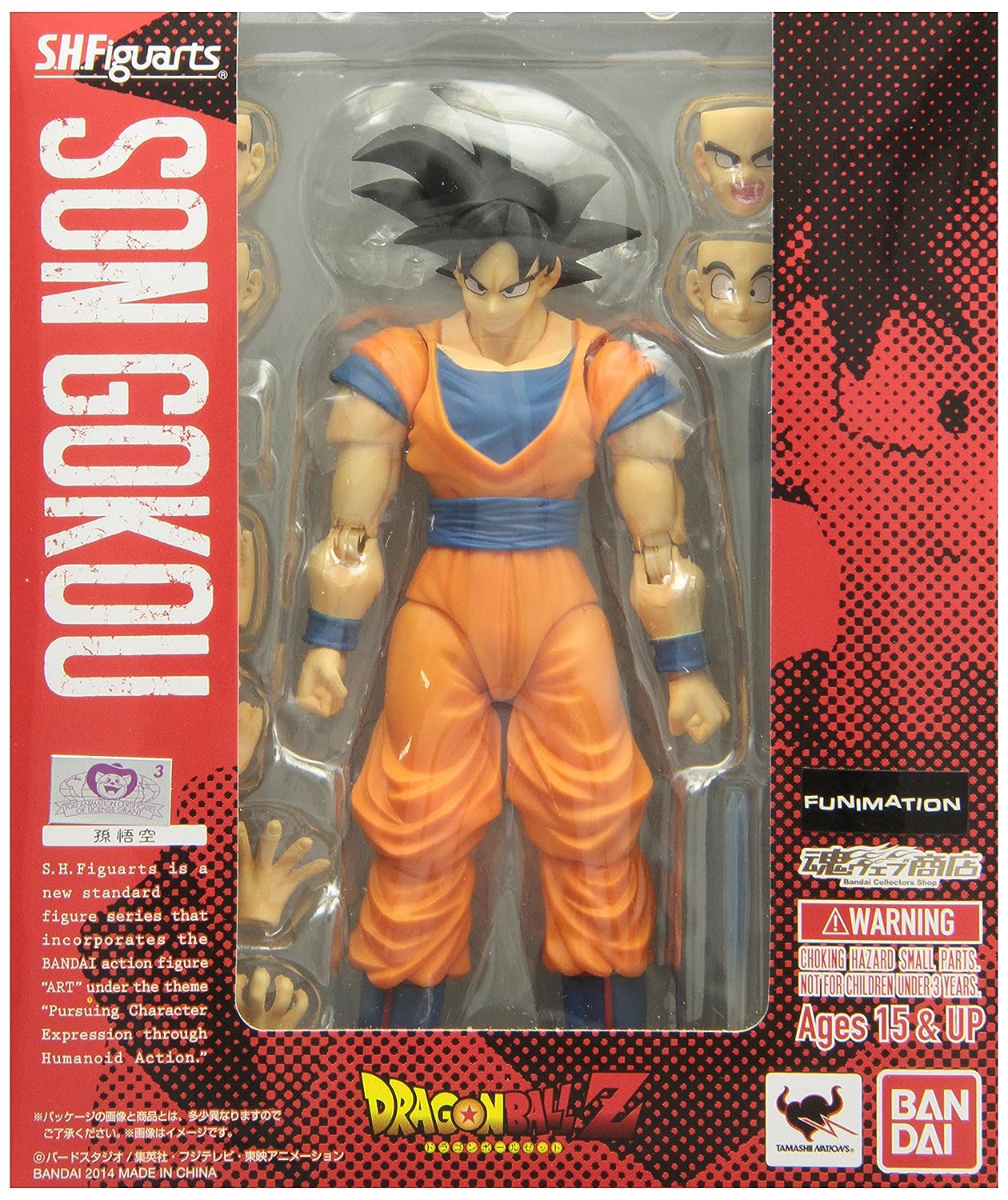 I love the effects on the Dragon Ball Z figures Goku fans love. These are from Bandai. They always look so awesome like the power swirling around the super saiyan three figure of Goku. But, my favorite is the Kamehameha attack Goku.

It’s from when he was facing off against Vegeta during the Saiyan Saga. It’s just classic Goku in an awesome pose with some really cool effects around him. Like the smoke around his feet because he is using a really strong attack that’s pushing him back.

I also love the base on him. His feet are firmly planted in the dirt to unleash a devastating attack. Everything about that statue is great. I just get so happy seeing him from back in the day when he was fighting Vegeta. Training with King Kai and all the shenanigans on Snake Way. I can vividly remember him sleeping on the street sweeping truck along Snake Way.

The Kamehameha Goku figure also has excellent paint. I love when characters don’t have the flat paints you see sometimes with figures. These have nice gradients to them. And the colors really pop. Goku’s black hair also really makes the figure pop out well.

The Super Saiyan 3 Goku figures also have excellent paint but, I just favor the Kamehameha Goku. Anyway, all three statues here are top notch. That’s what you can expect from Bandai. 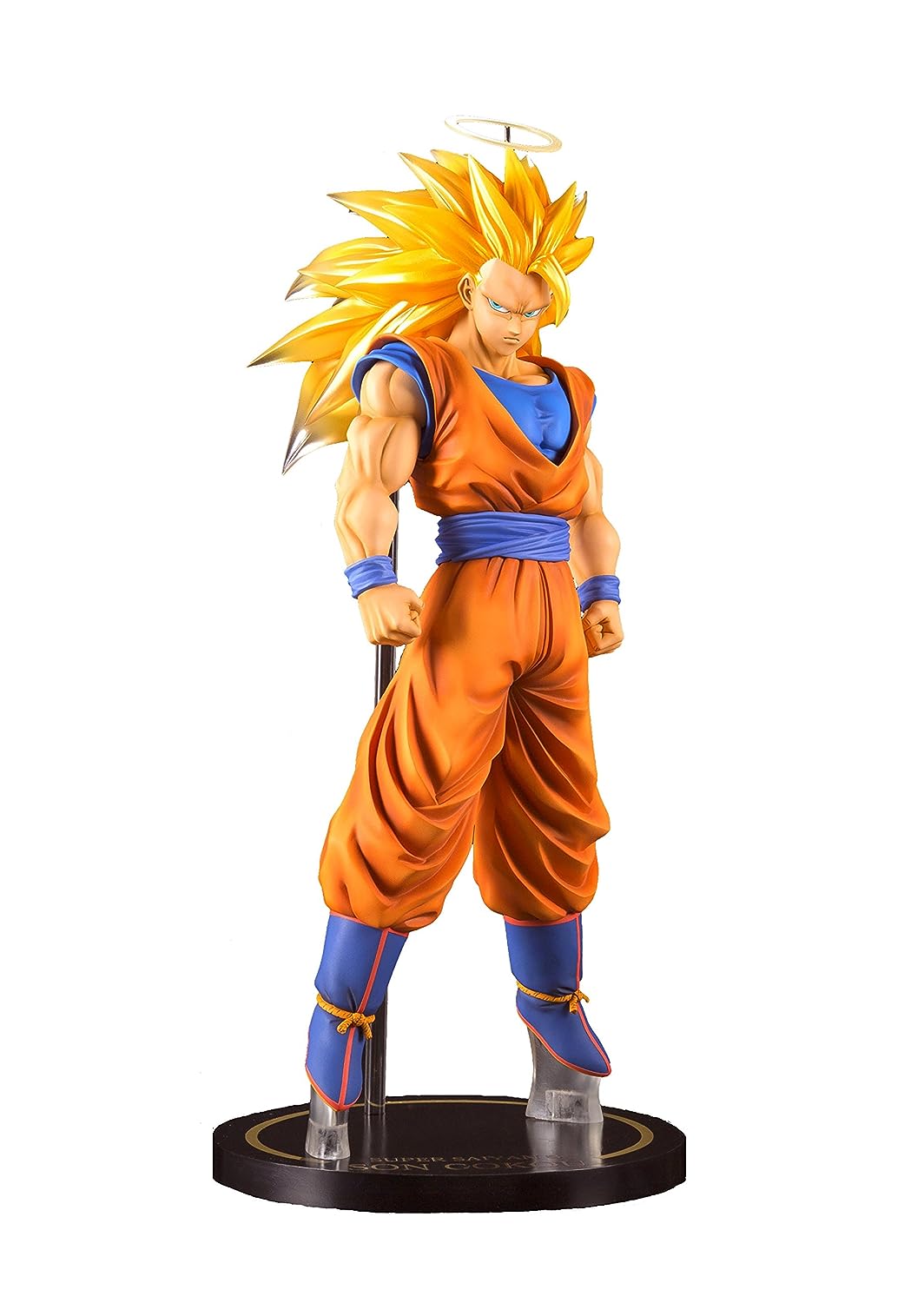 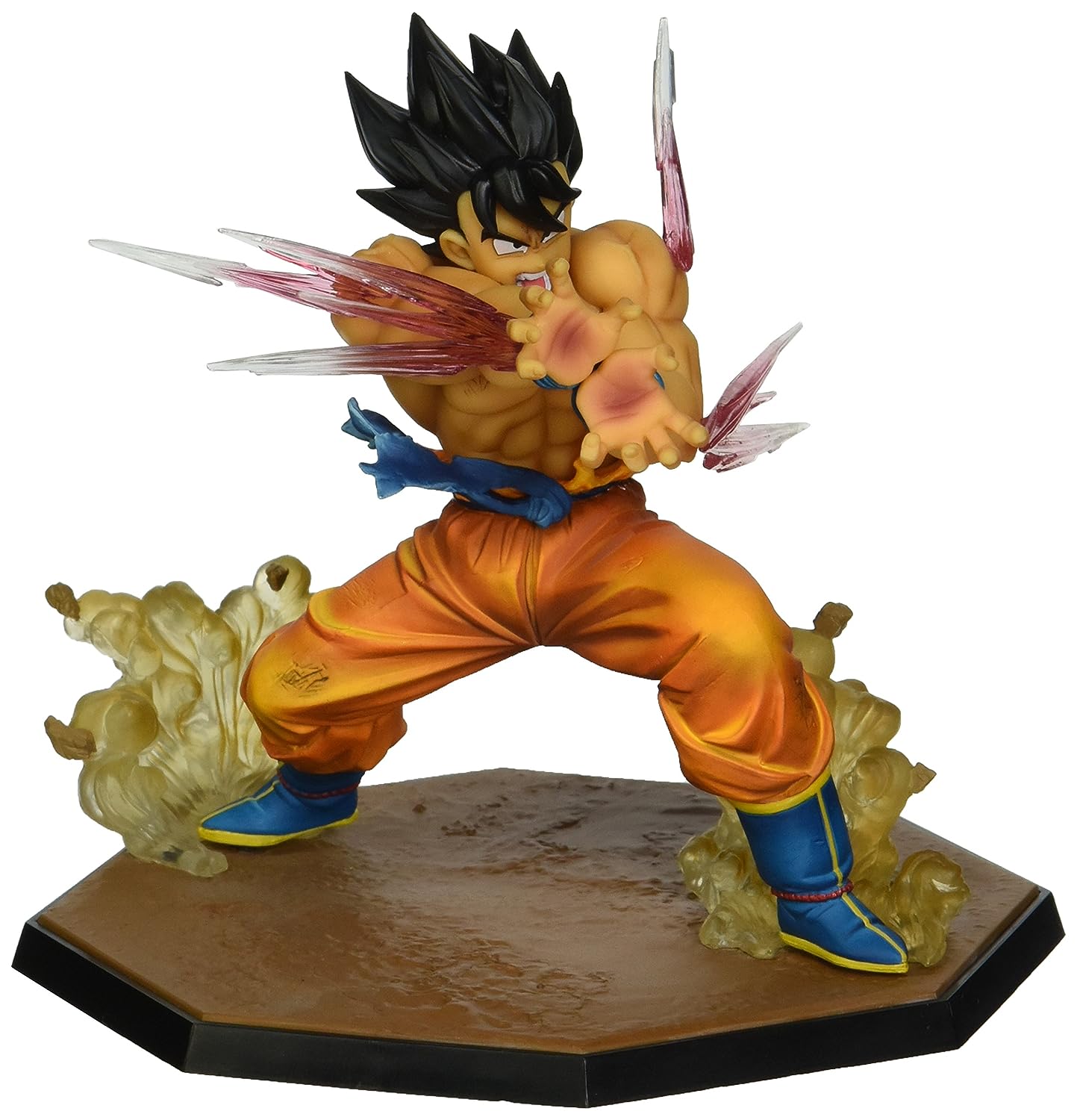 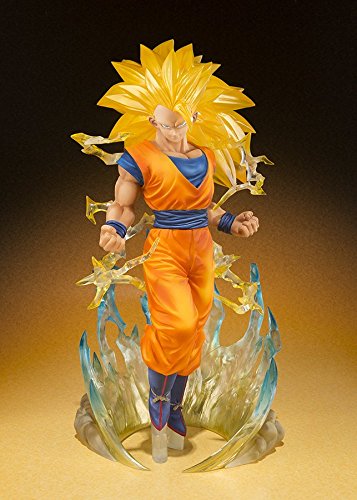 If you’re looking for quality figures on a budget, these are the toys for you. These are model Goku figures. So you actually put them together yourself, which is a lot of fun. Nothing beats chilling out and putting together a Goku.

They are also really well priced. They have a good bit of articulation, although not as much as the Tamashii Nations figures. There are also plenty more to collect besides just Goku too. They have Freeza, Cell, Kid Buu, and much more.

And you gotta love the fancy boxes they come in. One thing I love about toys is the fanciest of boxes. 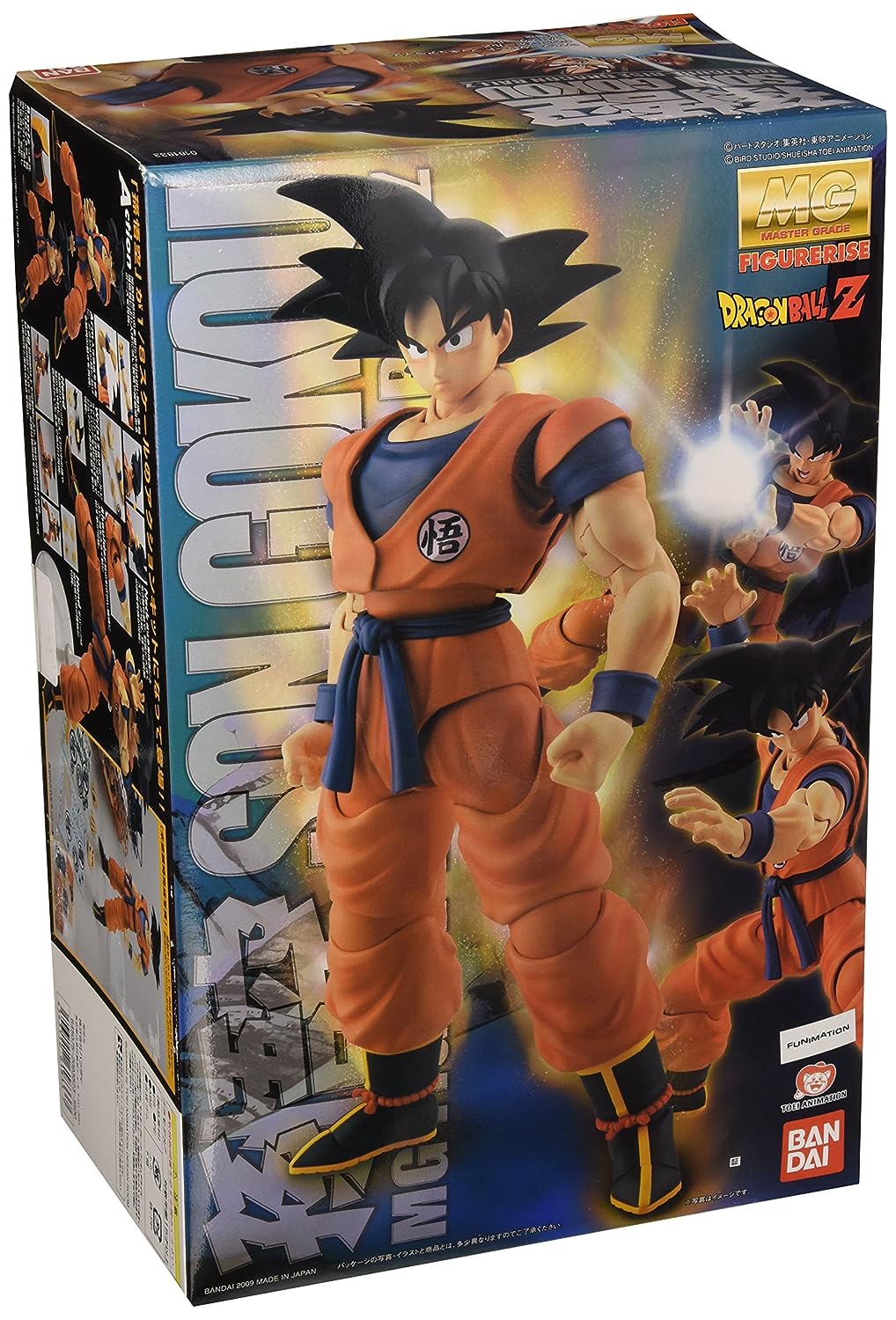 There are a lot of Funko Pop Goku figures. Too many to list right here. They are all really cute though. And they are so collectible. There are hundreds if not over 1000 (over 9000?) figures to collect from all sorts of different shows and video games. All really well made and very fun to collect. The perfect Goku Dragon Ball Z toy.

Check out all of the Funko Pop Goku figures here! 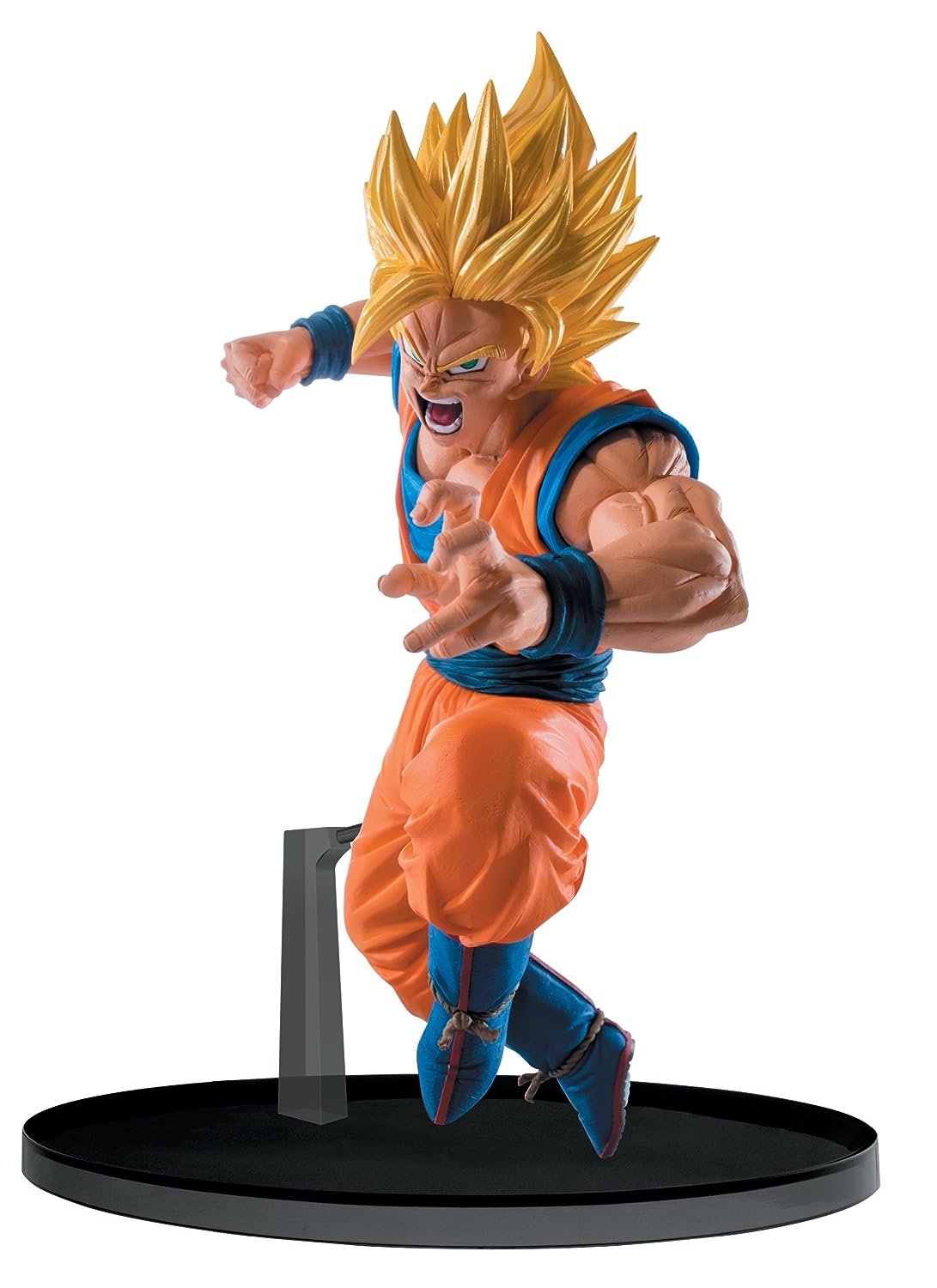 Banpresto is so well known for their statues. It’s because they are so well done! The detail is crazy on this Dragon Ball Z Goku toy.

You know those little lines on your joints of your fingers where they bend. HE HAS THOSE! Even his finger nails are on the figure. I think the huge benefit to this statue is the awesome sculpt. Whoever did it is a master.

All of the details on the muscles and hair. Incredible. I am very impressed. And of course, the face is really well done too. It can be an awesome figure but if the face is messed up, it’s game over. It’s okay though because this is perfect.

He does have to be held up by a stand though. Because, ya know, he’s kind of floating a little bit. It is an action pose so it’s kind of a must. I really dig it. This guy stands out from all of the statues of Goku just standing there.

I didn’t even mention this but, there isn’t a whole lot of other Super Saiyan 2 Goku figures out there. It’s mostly just this one. And that’s okay because I love it.

And there you have it. The best Dragon Ball Z Goku Toys. Looking for more DBZ toys? There are some awesome Vegeta figures and really great Gohan toys.

I think I’ve covered most of my favorites but, there are plenty more Goku figures on Amazon!