Have you seen an evil bug monster that absorbs robots through his tail to power up? Oh yes, you have.  Sounds crazy when you put it like that, right? It’s Cell. He was always such a scary villain. Absorbing enemies through his tail was always terrifying to me. Luckily in his perfect form he can’t do that. Most of the Dragon Ball Z Cell Toys I have for you today are Perfect Cell. And I love em. Let’s check them out. Starting off with my favorite.

Check out all of the Cell figures right here on Amazon. 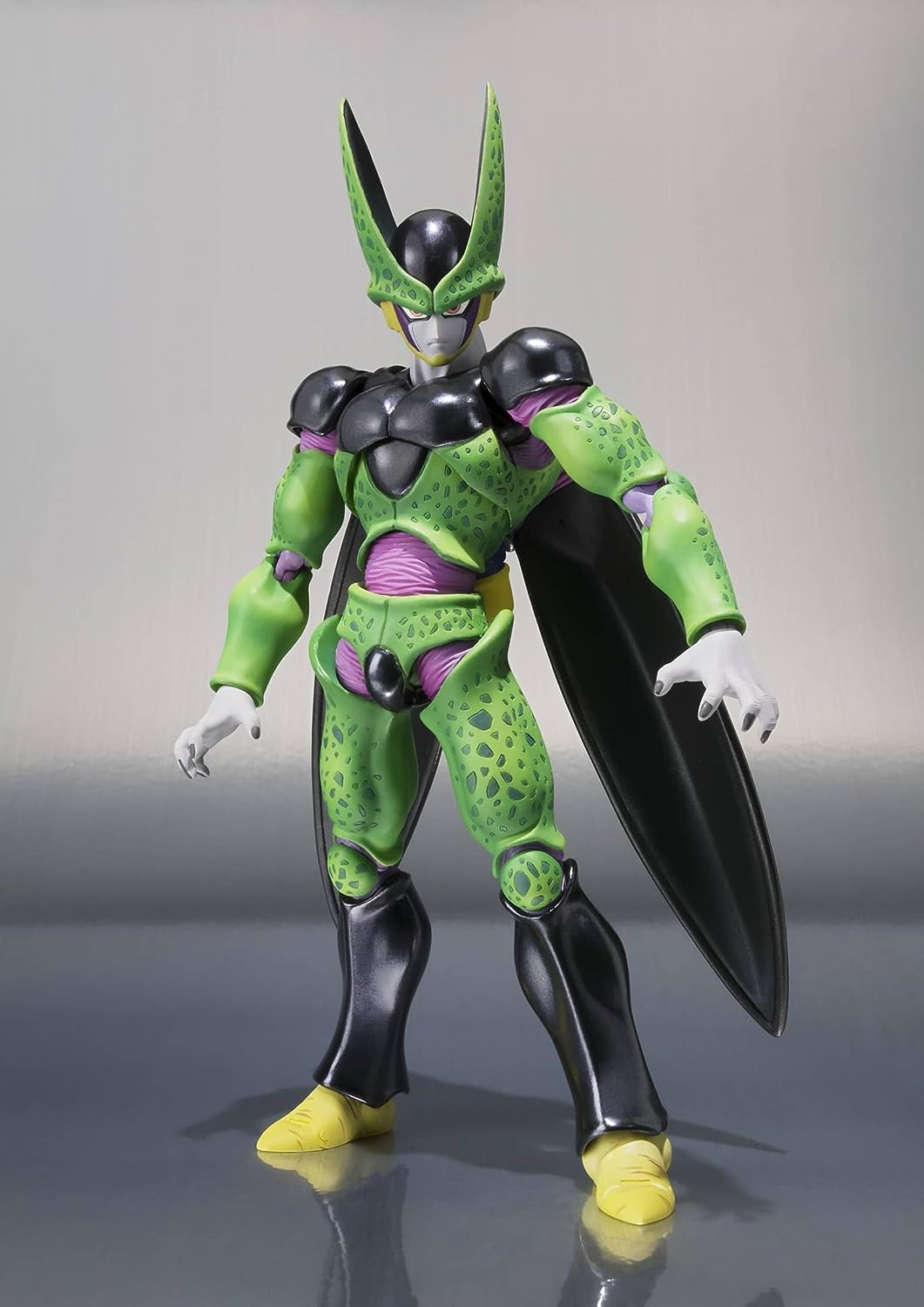 This is the new Perfect Cell toy release from Bandai. It comes out March 31, 2017. Cell was so popular they had to do another run of him. And I must say, this run is looking even better with a nice green color to it. And that’s because the new Cell figure is actually a premium colors edition which I really love. The old one was awesome itself but, this is just great. Better even. The colors pop.

I very highly recommend this guy because Tamashii Nations figures never disappoint. They are always put together very well and they’re top notch in quality.

As is the standard, the Bandai Tamashii Nations figures come with so much articulation you may not even know what to do with him. You can pose them however you want because there are so many joints. Cell is no different. DBZ figures, in particular, are so much fun to pose because of how action oriented the series is. They are always ready to charge up some kind of energy blast. Tamashii Nations figures definitely put the action in action figures.

It looks like Cell is coming straight out of the show. The colors are very intense. In a good way! Detailed right down to the spots all over his arms and legs. This guy is definitely my favorite cell figure. I recommend this figure the most for Cell fans but, the second one I like is the Banpresto Cell. Which I’ll talk about him later.

Looking for another fantastic action figure from Bandai? I highly recommend the Tamashii Nations Goku figure. 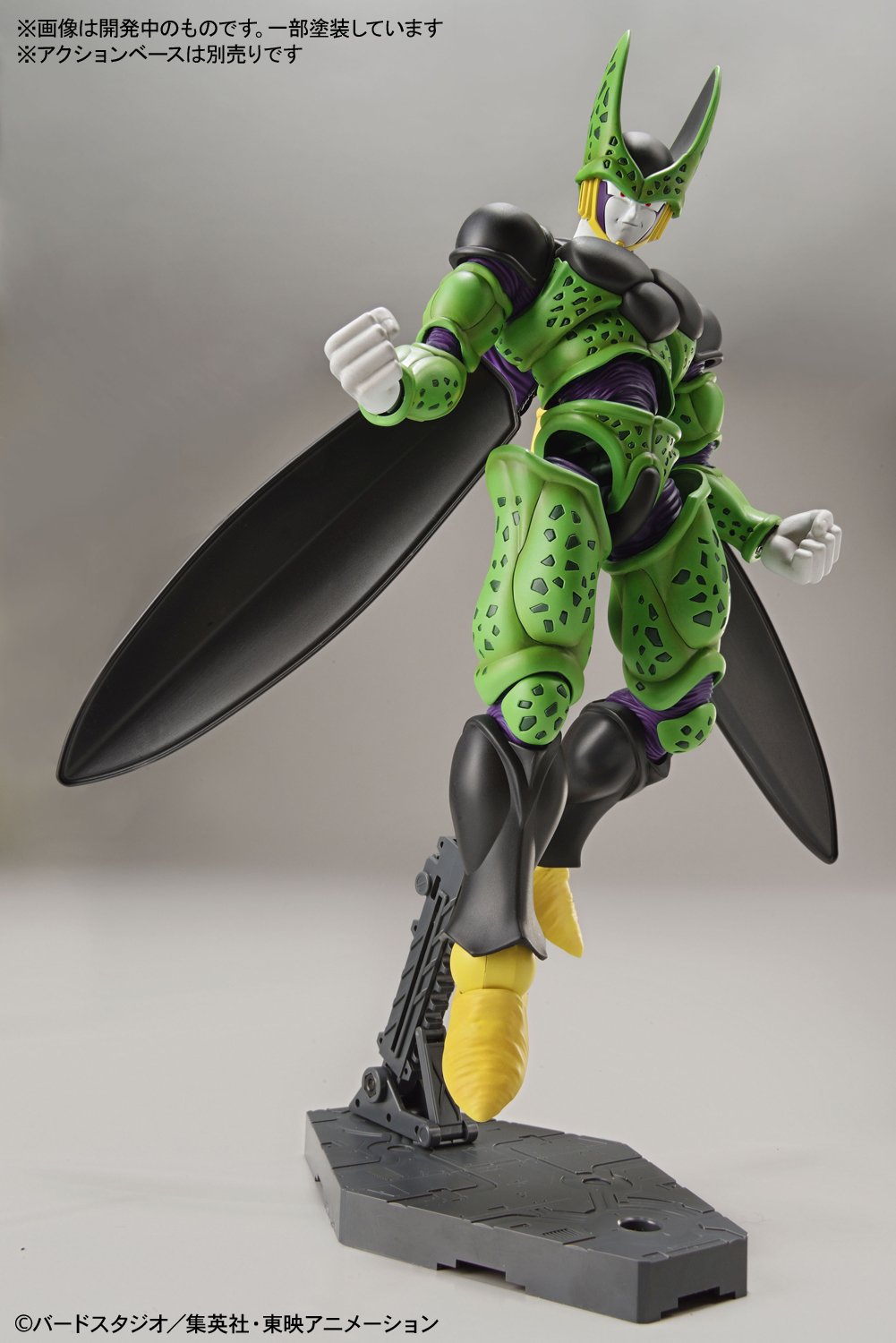 Model Kit Cell is spectacular. If you like putting together models this is a wonderful toy for you. I know I have so much fun with it. It’s very relaxing to turn on some music and just put him together. He comes with a stand. So if you want to put him in some crazy poses, you totally can.

Cell here comes at a great price point. You can’t argue against what you are getting for the price. It’s a steal.

This Dragon Ball Z Cell figure has some good articulation it’s definitely easy to make some awesome poses with this guy. In fact, I like all of the great villains from DBZ with these Bandai Hobby figures. Cell, Freeza, and Kid Buu.

The details are great and the colors, nice and bright. So to sum up, the two best things for me with this guy are the great price point and the fun of putting together a great looking model kit.

They have a lot of model kits for all of the DBZ figures. 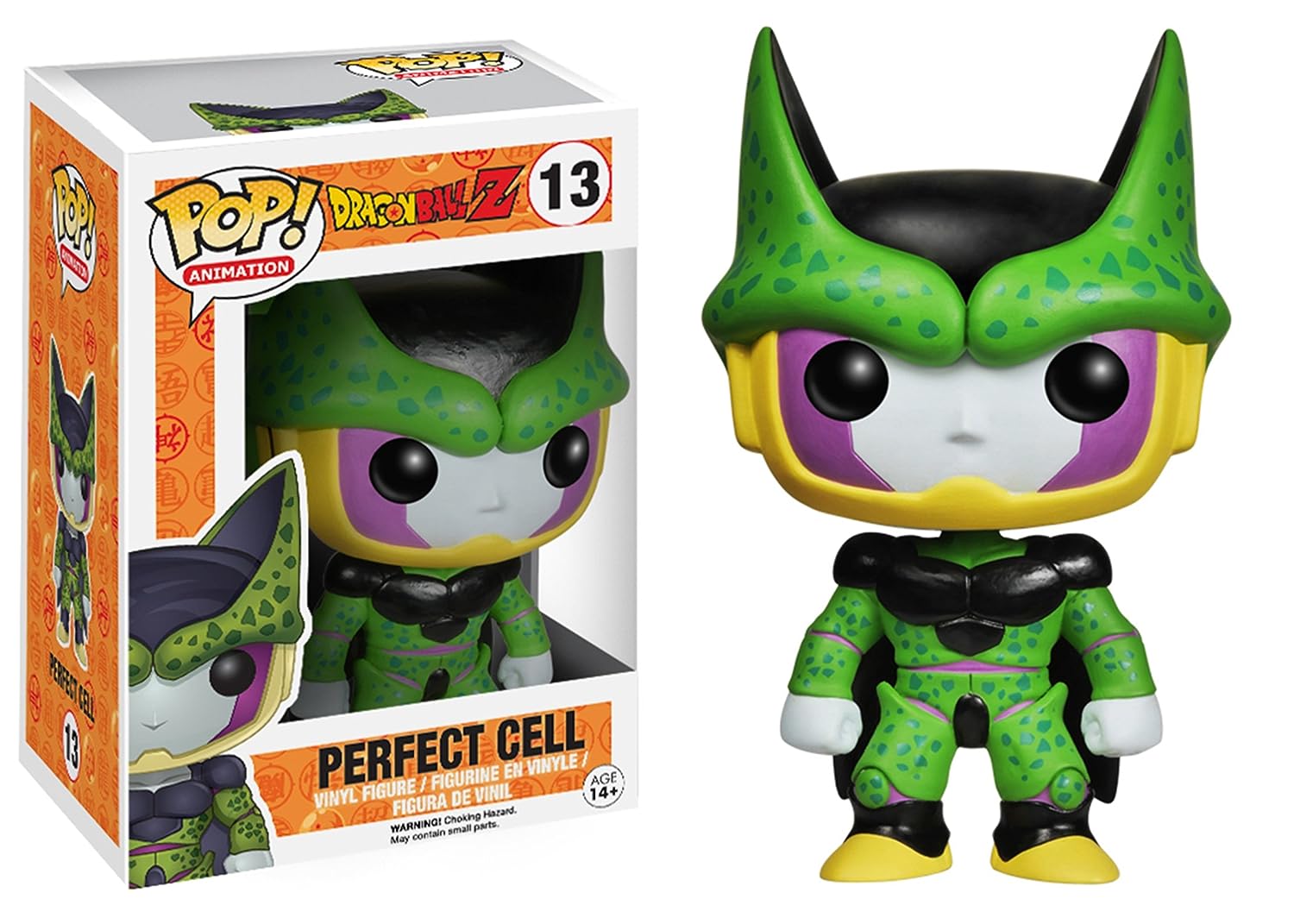 Once again, you can’t escape from the adorable Funko Pop figures. Especially not Perfect Cell.

As always, Funko Pop delivers the cutest little guys. Taking this horrible villain and making him into a cute figure is wonderful. There’s just something about it I really like. No one would ever expect this cute little dude to hurt anybody.

The green and yellow really pop against the purple and black. I love collecting Funko Pop. There’s always another one that you can add to your collection. So a definite highlight is that there are so many Pop figures to collect and this one fits in nicely with any collection.

So, if you’re a Funko Pop fan and a DBZ fan, this is a no brain-er. 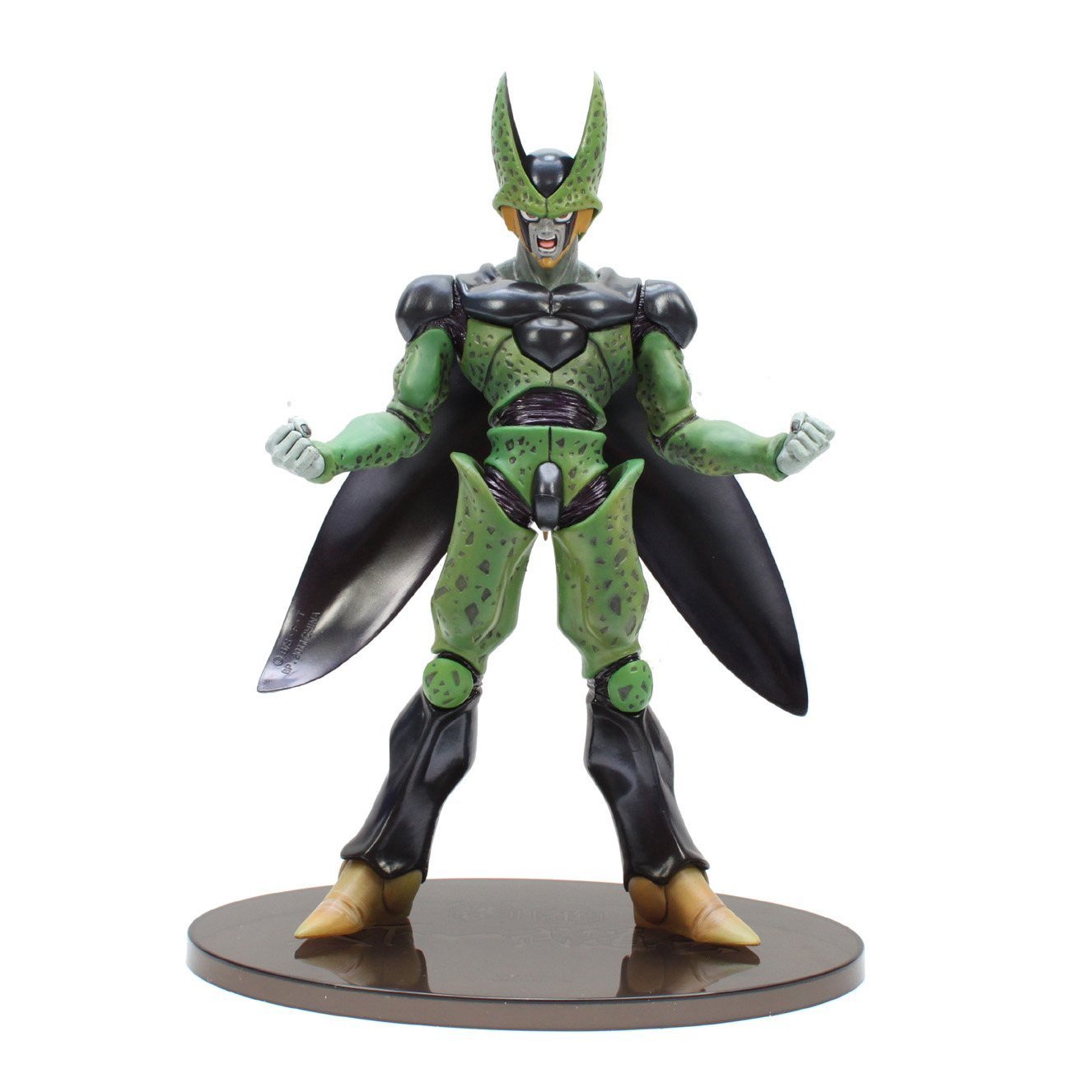 Perfect Cell From Banpresto looks quite intimidating. He has a really powerful stance and that makes sense since it’s a powerful character. Cell was a tough foe to defeat indeed. He’s 9.5 inches tall too. A big size!

It looks just like Cell. Great detail. I really like the colors actually. I think they are a little bit more realistic than the show portrays. For instance the shoes. In DBZ the shoes were very bright yellow. This statues shoes are a little more faded. I think it’s a nice touch. There’s something to be said about a figure that gets the colors right. So, I think he captures the look of Cell but, the colors are a little different.

Very well sculpted. I mean it wouldn’t be a Banpresto figure if it wasn’t sculpted flawlessly. And, in addition, the paint is well done. Yup, he looks just like a humanoid bug, creature thing. That’s what he is right?

Cell comes with a plastic base which is alright. It’s not my favorite type of base for figures but, it does the job just fine. It looks very presentable. Great for a collectors piece. Banpresto always delivers high-quality figures. I am not disappointed in the least. 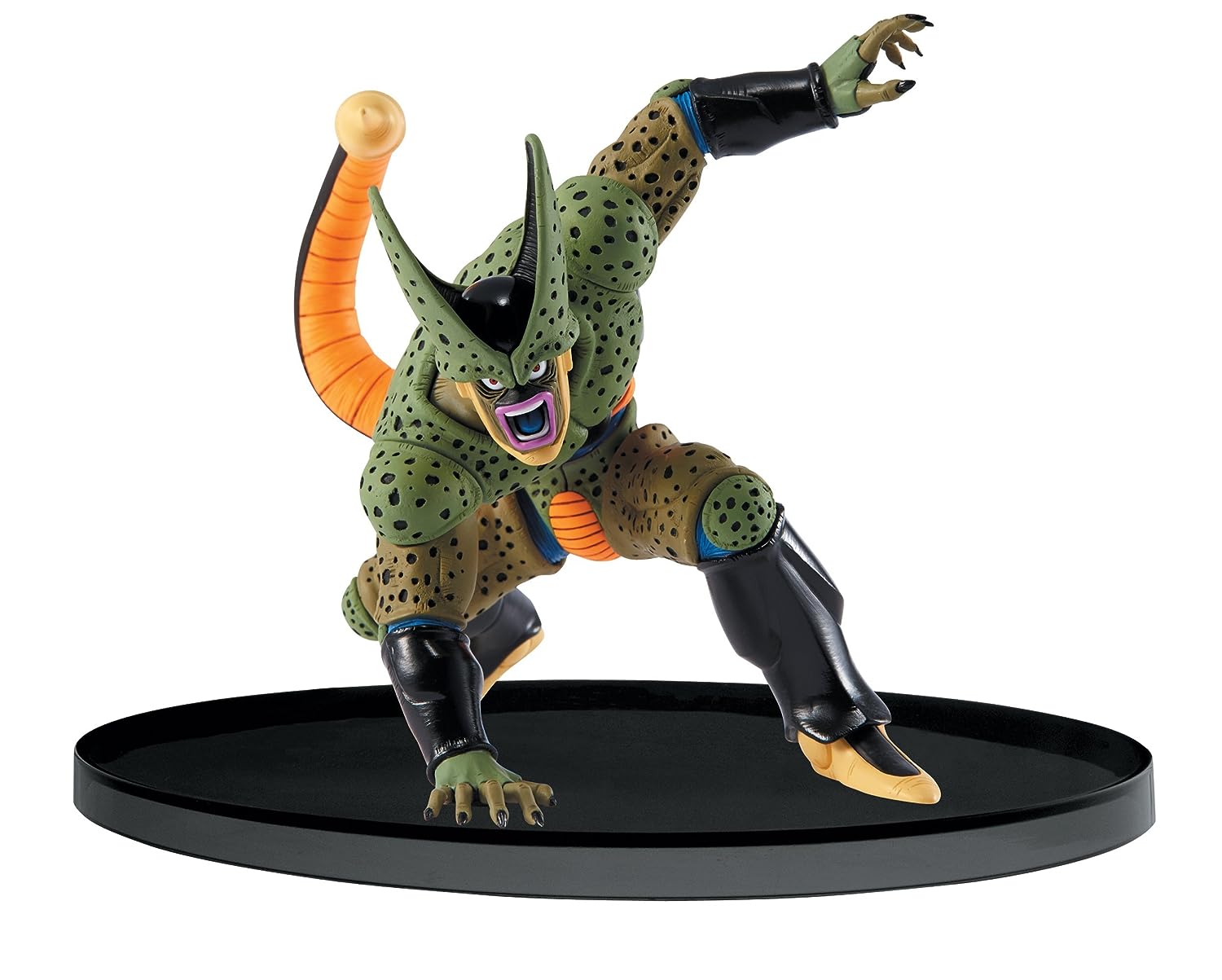 Semi Perfect Cell/Second Form Cell looks scary here. While I personally feel that Cell’s second form is a strange middle ground between his perfect form and his strange bug like the first form, this figure is still amazing if you’re a fan.

It’s actually the only awesome Second Form Cell figure I could find. It’s the only one. And you don’t need any others because this figure is perfect.

It’s another awesome Banpresto figure. Complete with all of the details you’d expect from the company that makes quality DBZ statues. It’s detailed right down to the wrinkles on his face. I’m serious, it looks really good up close.

It comes with another plain base and while again it’s not my favorite, it gets the job done.

Cell has a neat pose. A lot of figures are posed so they are standing up to look quite powerful. But this one is right in the middle of battle. He’s coming at you with his suction tail thingy. That’s scary enough on its own. I think if you’re looking for a little variety in your collection this is an awesome Cell figure to get. So many figures are just statues standing up straight.

A perfect Dragon Ball Z Cell toy for those fans looking to complete their collection.

All other images provided by Amazon’