Today we’re looking at Dragon Ball Z toys Gohan loves. And that’s because they’re figures of him! Oh man, Gohan has grown so much throughout the DBZ series. He has turned into a strong fighter indeed. What did you expect? He was naturally gifted when it comes to fighting. We knew it straight from when Goku was fighting Raditz. When Gohan broke out of the space pod. Remember that? Gohan has even reached mystic form with the help of Kai’s training or sitting down a long time. Whichever you’d like to call it. We’ll start with the most popular DBZ Gohan Toy.

The Most Popular DBZ Gohan toy 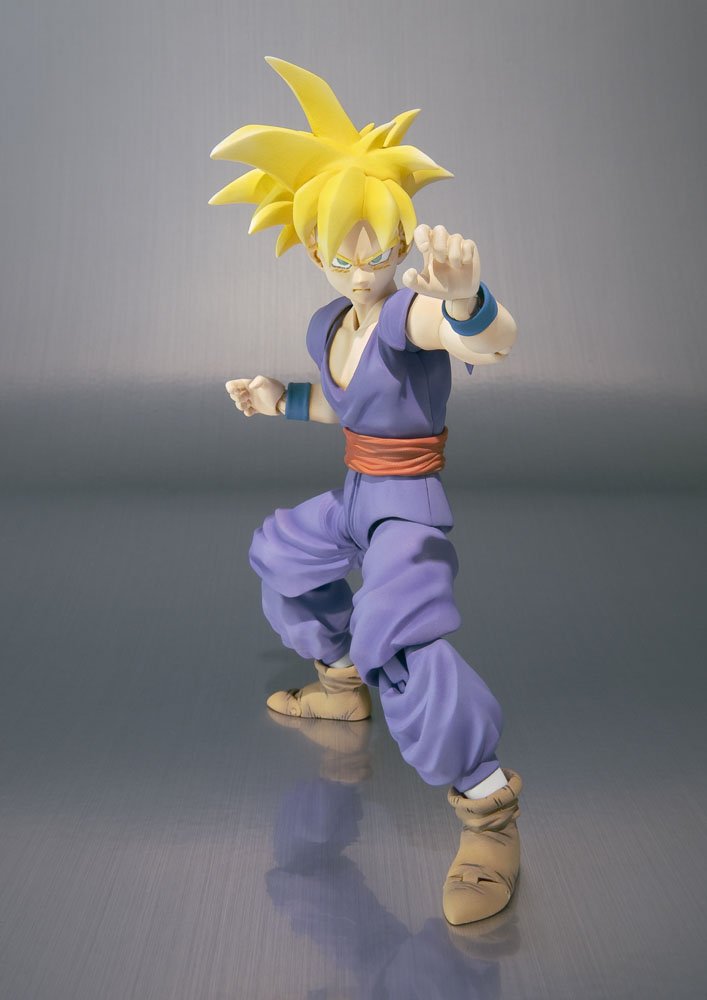 I’ve always loved piccolos cape. It just looks so cool. And I’m happy that this figure comes with it. It just makes the toy so much more awesome. It shows that Gohan was a student of Piccolo.

This figure is actually very durable too. It’s nice when you have a figure that doesn’t wear out as soon as you start moving it around. It just shows how well made it is and the quality of the materials. Top notch for sure.

Like other Tamashii nations Dragon Ball Z Gohan action figures, these two are high quality and they are very well made.

Lots of articulation makes posing the toys really easy and painless. The durability and nice materials make it stress-free when posing. You won’t get scared you are going to break something.

I love the fact that you get plenty of accessories. One such item is an energy ball. Others are interchangeable hands. They make setting up cool scenes for the characters easy as pie. You can also change out the face too when you want to get the scene just right. There’s nothing more strange than one of your figures charging up an attack with a bored face. Imagine an episode of DBZ where Gohan is powering up and he has a blank look on his face. Yeah, no good.

The battle torn Gohan on the right here is actually only available on February 28, 2017. But, I’ll definitely be getting one of these when it comes out. I like the ripped clothes for this figure and there is also a great Goku figure with ripped clothing. It’s great to have them both! 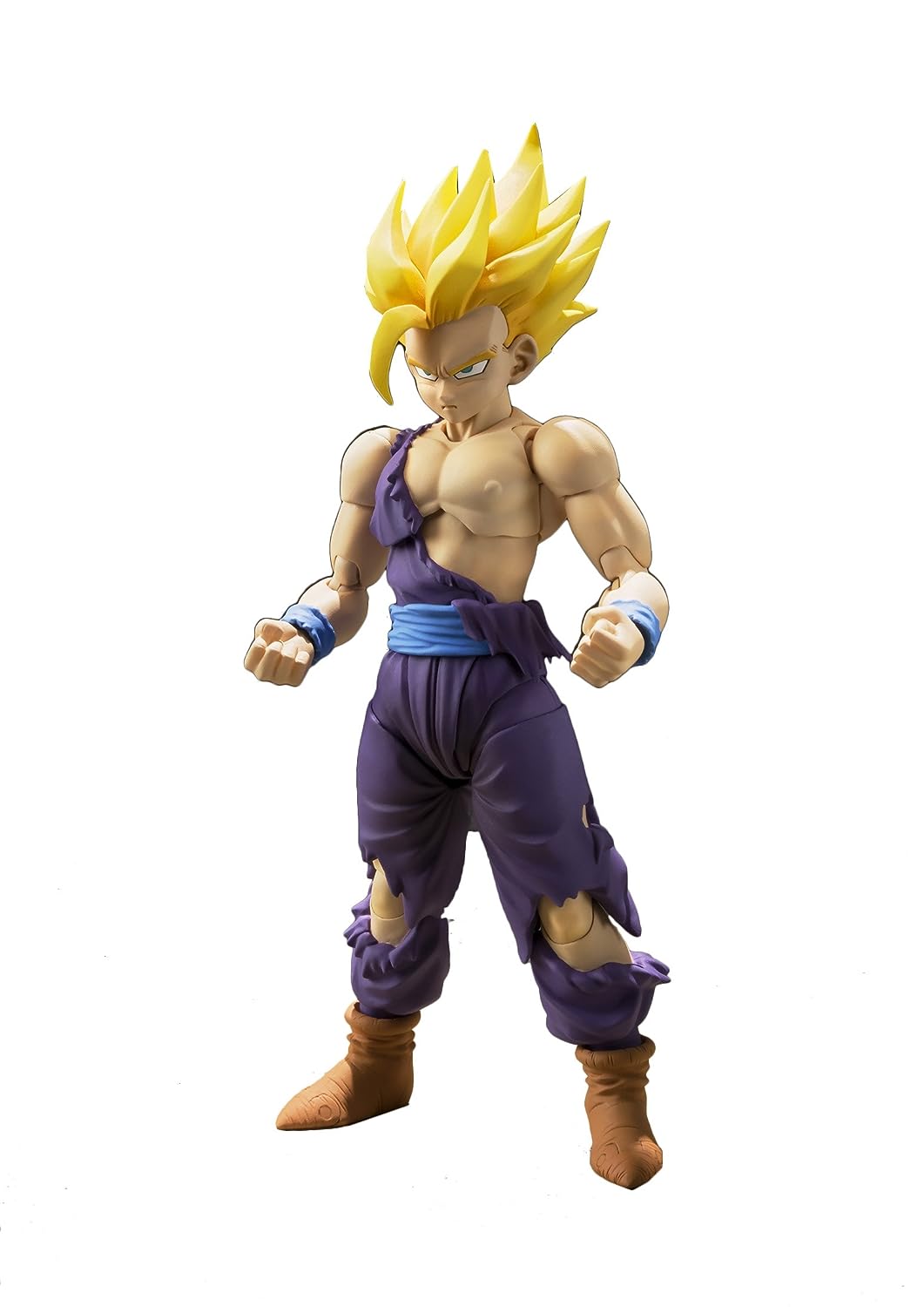 Here we have the Gohan model kit from Bandai’s Hobby figure series. It’s difficult to beat such a great price, especially when you think about what you get for it. You get to build models AND have a great figure afterward? What a deal!

I always have so much fun putting together these models. It’s just a very relaxing thing to do after a tough day at work. I have never had any problems with them and it’s great fun to get the character all set up and ready to go.

Comes with the Kamehameha effect charge up and fire so you can set up a battle scene taking place. I love that they added the special charge up effect to the figure. Sometimes the fire effects are really neat but I think this was an awesome idea and I hope they do more of that in the future. I love when you see the characters put their hands on their side and the energy ball forms. You know something’s going down.

Collectible with other model kits because there are plenty more where that came from, including Cell, Freeza, and Kid Buu. You know, all of your favorite villains. One of the greats when it comes to DBZ Gohan action figures 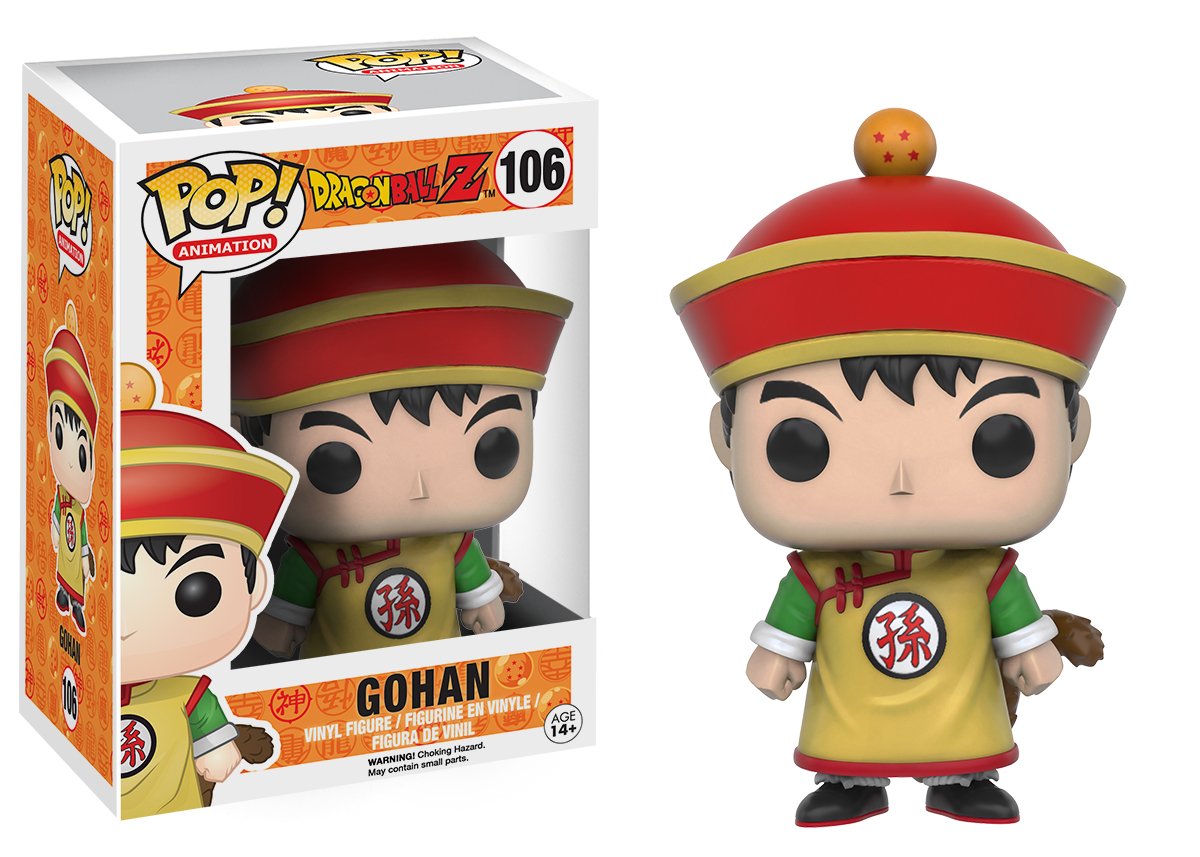 You’ve gotta include a kid Gohan toy. The Young Gohan Funko Pop figure is super cute! I instantly remember him hitting Raditz in the stomach using his hidden power. I was always so curious about how strong he was and unlocking his potential.

The Funko Pop toys are always extremely popular. And for good reason! They sell so well. And that’s because they are made with so many positives. It’s a very cute little figure that fits with young Gohan. Complete with a dragon ball on his hat.

Great price on this guy. It’s never a minus to have an awesome toy at a low price point. There are plenty more DBZ figures with low prices too!

Of course, it’s Funko Pop so you know it’s a well-made figure. And also, high potential for being a collectible figure.  Funko has a vast library of characters to collect.

Banpresto makes awesome statues. Especially of Gohan! They have all of the Dragon Ball Z Gohan toys you could want. My favorite is the Saiyaman Gohan. The paint on him is absolutely fantastic. There are lights and darks in the paint. It isn’t just a flat paint job. And the gold tips on the boots are super cool. They look like metal. I love it.

Lots of detail and high quality, Older Gohan in his orange uniform looks great. I love the base for it. It looks like cracked cement. Nothing too crazy. But, I’m just happy that they made an effort to make it look like Gohan is in an actual environment. He’s not just some static display piece. You know I love when they make the base sort of blend in as part of a scene. It makes it more legit to me. Some of the bases for the other statues here are not my favorite. But, they do what they need to do. They make the figures look presentable and that’s just groovy.

Banpresto has made Gohan of all ages. Whether you’re a fan of young Gohan or teen Gohan toys there are plenty of options for you. All of which are truly wonderful.

These are great prices for collector’s pieces. I’ve seen figures like this go for much much higher in price so I would hurry to get some of these if I were you. 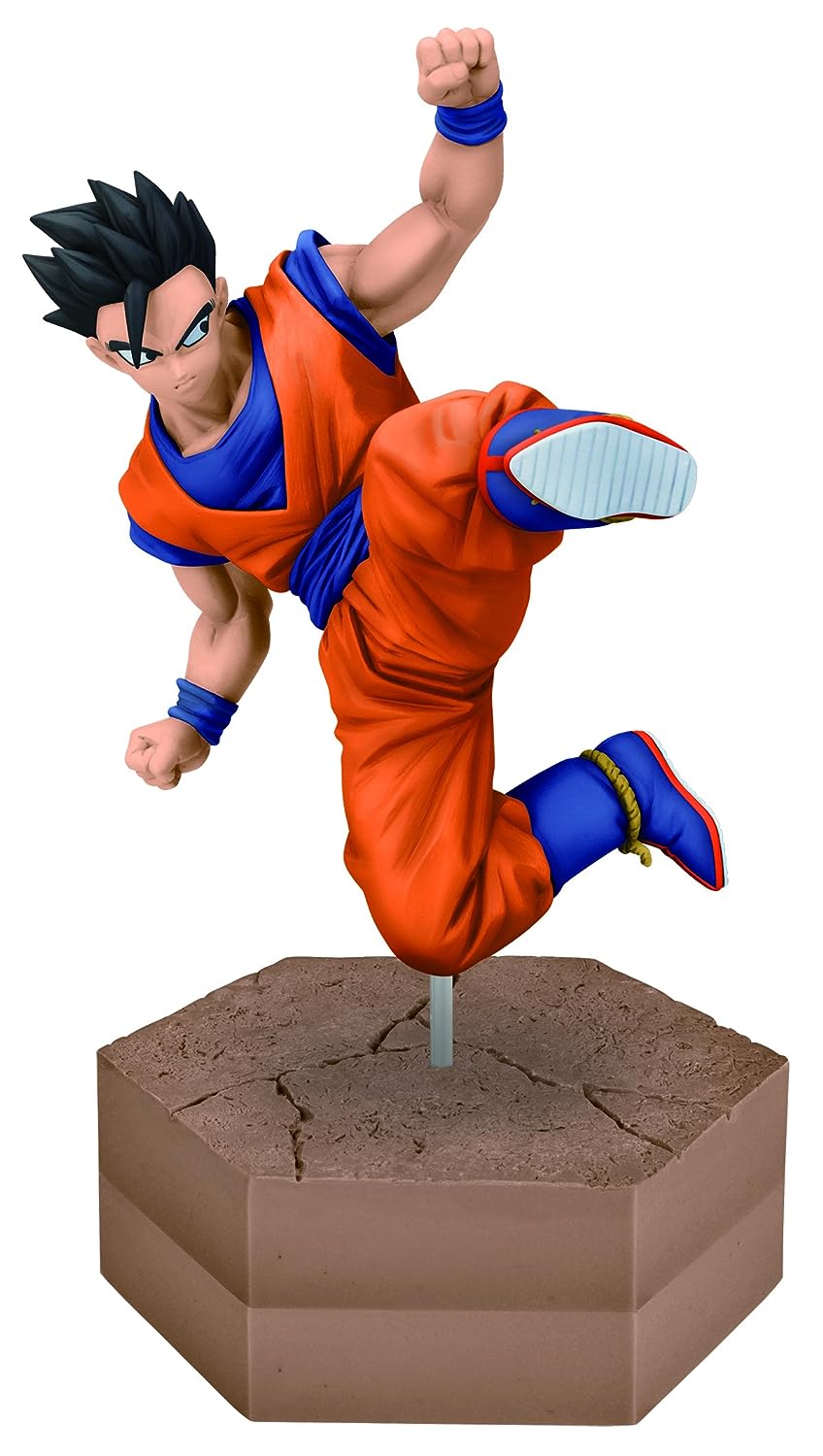 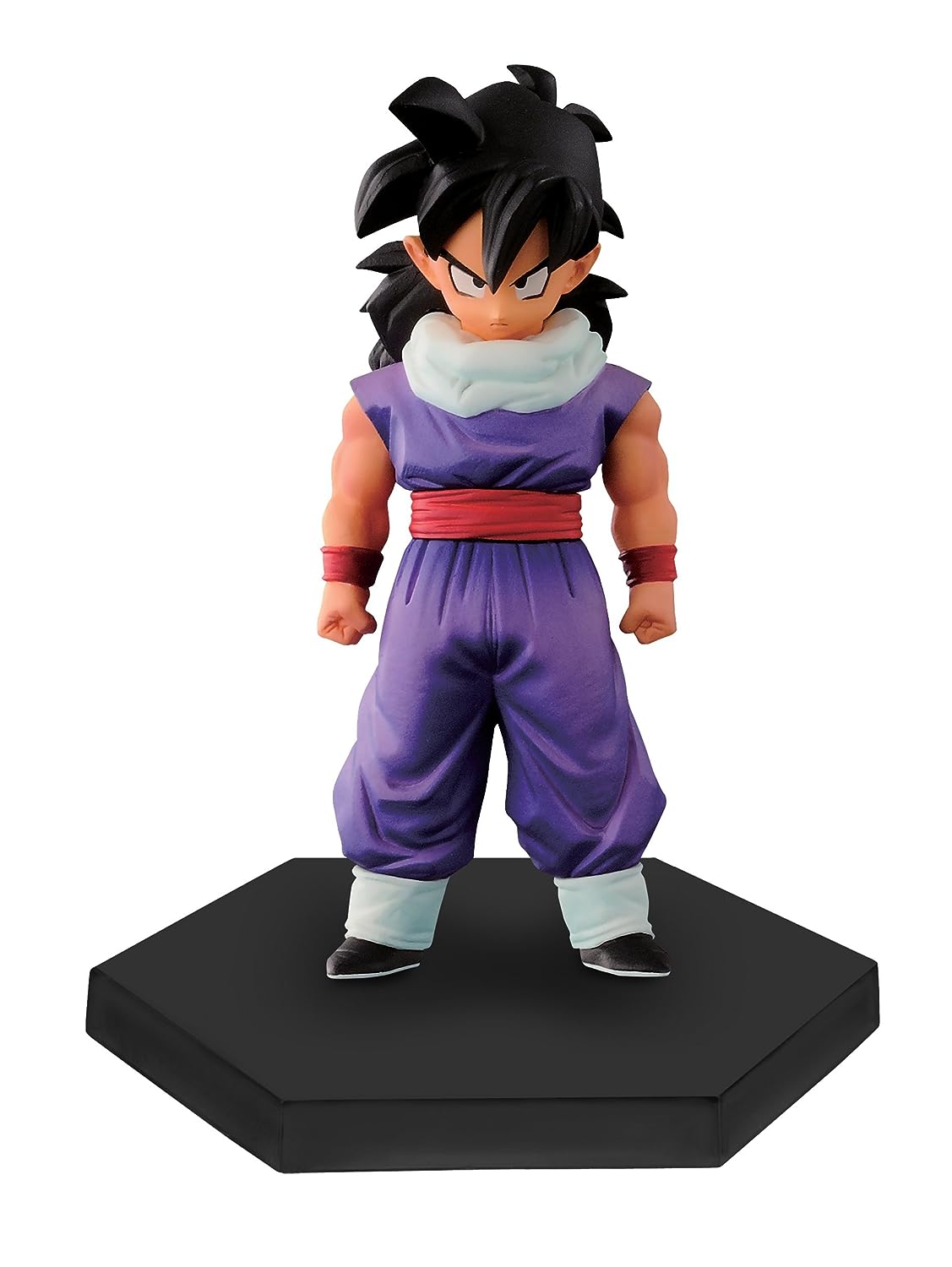 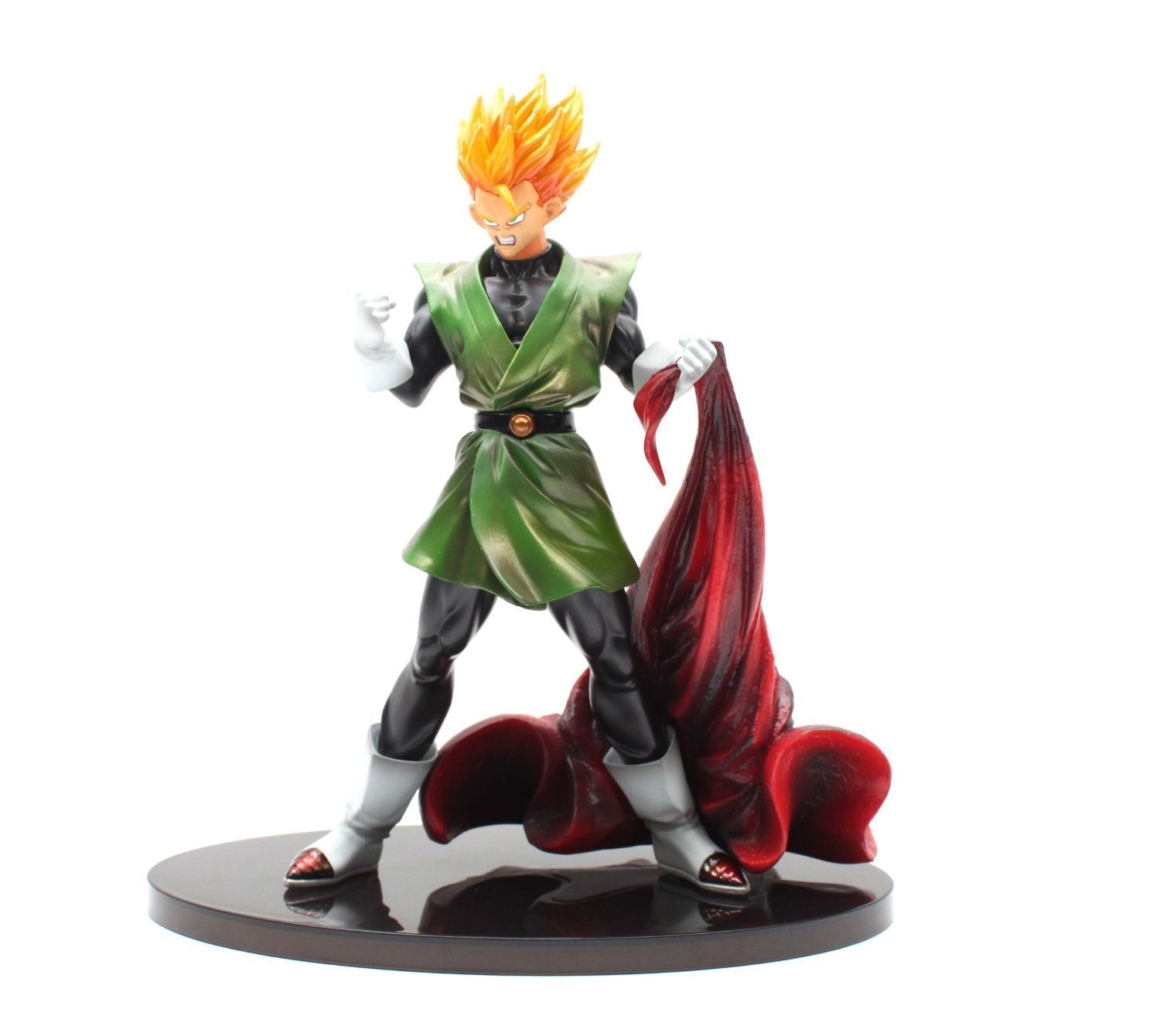 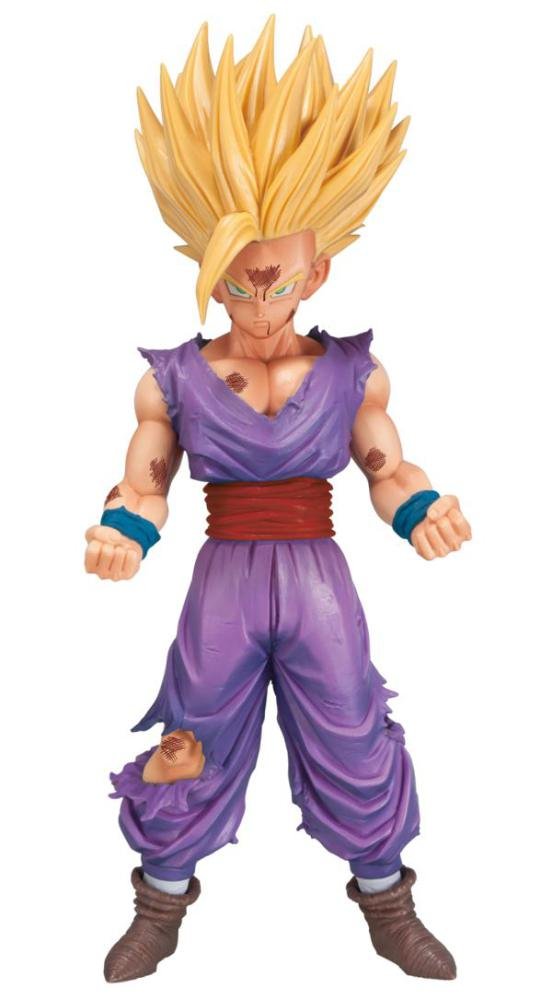 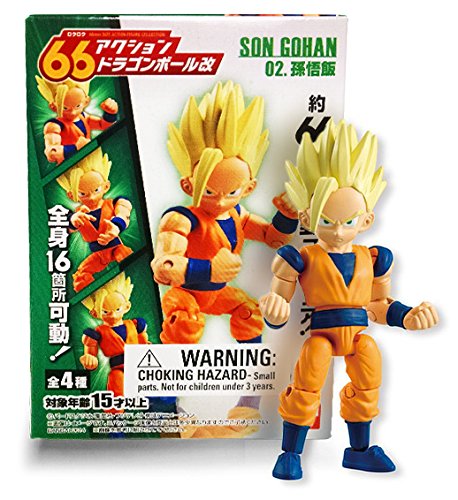 This is the Shokugan Gohan. I myself am partial to the Tamashii Nations Gohan myself but, if you want a figure that has a lot of articulation at a much smaller scale, this is perfect. There are a few more in this series as well such as Trunks and Vegeta. I just think this figure is quite interesting. Who would think such a small figure would be this pose-able. An awesome DBZ Gohan toy.

One thought on “Have You Seen This DBZ Gohan Toy? These Toys Are So Awesome!”