This Dark Angel Olivia figure has a ton of detail!

Update: The red version is currently unavailable. But, the white version is available right here!

Firstly, there is a lot of detail on this figure. Her hair, armor, clothing, tattoos, horns, face, belt, even on the bottom of her boots. Lots of things going on. The face and eyes look great. It all looks superb. Great figure.

You can remove the wings and her head, the torso too. This is because you need to be able to put her belt accessory on and have an easier time attaching the wings. Since you are able to remove the torso, it’s pretty easy when you want to attach the wings. Therefore you don’t have to move the entire figure around when fitting the wings in. 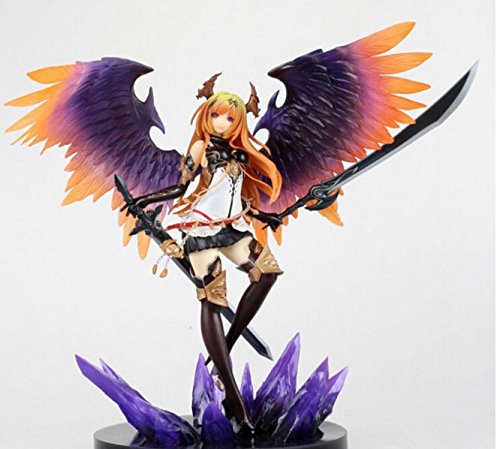 My favorite parts of the Dark Angel figures are the wings!

The wings are probably one of the best things about this character. Her wings make her look very impressive since they are so grand. They transition from a deep purple to an orange color, very cool. She has a nice color palette because the orange works well with the hair and the purple goes with the crystals on the bottom.

While it’s not my favorite base for a character, I like the crystals as a nice addition. They’re great because they make the base feel more like it fits with the character.

While I dislike assembly, it’s not a big deal. You just need to put the weapons in her hands, add the wings on, remove the head and upper torso to add the extra belt. Although there’s a bit more to do than other figures, I don’t think it’s too bad. This Dark Angel Olivia figure is wonderful.

There is also another version of this figure. It’s a twin pig tail red version. It’s currently unavailable but, if you’re still interested you can check it out right here!

So there are actually two dark angel statues. There are a few other figures from Rage of Bahamut too.